A Face to Face Conversation with Dalai Lama during his visit at Tokyo University (July 22, 2010) 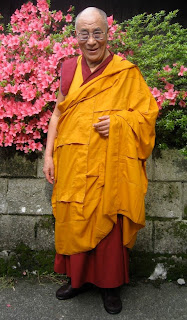 His Holiness, the 14th Dalai Lama, Tenzin Gyatso, 75 is respected by the Tibetan people as their temporal and spiritual leader. At age 2, he was recognized as the reincarnation of the 13th Dalai Lama, Thubten Gyatso.

The Dalai Lamas are believed to be manifestations of contentment, forgiveness and self discipline. There's plenty to forgive: the brutal Chinese invasion of Tibet by Mao Zedong's People Liberation Army in 1949 and the continuing oppression of the Tibetan people. So far over 1.2 million Tibetans have been killed and 6,000 monasteries destroyed. The violence is still ongoing. Forced to flee the mayhem in 1959, the Dalai Lama has been living in Dharamsala, India. For his message of peace and compassion, he has presented with countless awards, including the 1989 Nobel Peace Prize for his non-violent campaign for the liberation of Tibet.

His words and wisdom during our face to face conversation:

All major religious have the same potential to bring inner peace. These different practices, but the same message is the same.: compassion.

Happiness very much depends on trust. Money and power may provide you with same satisfaction, but now scientists, many in the medical field, agree that the ultimate source of a happy life depends on a healthy mind.

History has many versions. You must investigate the truth for yourself. For example, the Chinese Prime Minister said, "China has never invaded a country." That's the Chinese official versions. The second version is by Tibetans and the third is the Western viewpoint.

In order to contribute to the world, Japanese must learn English.The reality is that the universal language is English. Due to language problem, Japanese people can't contribute enough. It does not have to be perfect English. My English is broken but I can still communicate.(He thought that I am Japanese, but later recognized me as Filipino.)

If you have genuine concern for the well being of others, there's no space for violence. Religious harmony is viable. India has a tradition of non-violence called Ahimsa for thousand years. Sure occasionally it's all very good. I describe myself as a messenger of India and I bring the idea of religious harmony with me everywhere I go.

Tragically, one can never be too young or too old for prison. I found the reincarnation of Panchen Lama in Tibet, a name Gedhun Choekyi Nyima, but the Chinese government abducted him. Since May 14, 1995, when he was 6 years old, he's been imprisoned and his whereabouts and well being are still not known. China has installed Panchen Lama, which is a gross violation of religious freedom.

It is most helpful to look at a problem from various angles. This analytical process is central to Buddism. We debate , we develop the mind, and this creates a peaceful heart. Buddha said. " All my followers should not accept my teachings out of respect,but through their own investigations. Analyze everything by yourself.

We're social animals so we need cooperation and friendship. I love this watch, I could kiss it, mmmwahhh!, but this watch can't show me affection. Our life is based on affection. We survive. Thanks to our mother's care. Those individuals who recieved deep affection at a young age are much happier. Those who suffer fear as children, even if wealthy now, have sense of insecurity.

Too much attachment to one's nation interest is not fit for the 21sth century's holistic approach. Those nations only care about their country and not about others. But we are interconnected more than ever before.

Tha gap between "us and them" must be lessened. The entire human race is part of "us". Race is not important. The gap between the rich and poor is huge in many countries. This is wrong not only normally, but also technically.

Government leaders should have a long term vision and open minded. In ancient times, each nation could survive on its own, but now we are much more interdependent. That's the reality, but some people's thinking is old fashioned, they think about "me" , my nation. This kind of insularity creates problems.

The 21st Century should be century of dialog and peace, based on compassion. My generation belongs to the 20th century, a century of violence. Two hundred million people were killed. Even though we have wars now, we must not lore the confidence and courage to believe that peace is achievable. There's a Tibetan saying, "Fail nine times;make nine times the effort.
Ipinaskil ni Jolito Ortizo Padilla sa 7:46 AM