On Japan's Front- An excerpts to - My Research on Japan's Analog TV- Presented at Tokyo University.. 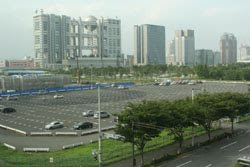 Less than a year remains before the total switch to terrestial digital TV broadcast in Japan. Analog TV broadcasts are scheduled to end July 24, 2011. While preparations for the transitions are being pushed, many problems must be solved to ensure a smooth transition.

The National Association of Commercial Broadcaster in Japan says that by the end of the year 2010, 98.5 percent of the nation's household should be able to recieve digital TV broadcast waves. The price of popular 32 inch digital TV has dropped to around Y50,000. Government "eco-point subsidies" have helped boost digital TV sales. As of March, the accumulated shipment for digital TV's reached 73.74 million units and 83.8 percent Japan's households owned such TV's according to the Communications Ministry.

But among household with an annual income of less than Y2million, the ownership rate was only 67.5 percent. Free digital tuners- to be connected to analog TV's- are being distributed to as many 2.7 million households on welfare. Only 820,000 households, or about 30 percent of the households on welfare, applied to receive tuners by the end of June, 2010. The Ministry has had a difficulty identifying such households in need of the tuners.

Nor has there been progress in preparing community antenna facilities in the shadows of high buildings. About 6.5 million households are connected to some 60,000 such facilities. A similar situation exerts with antenna in mountainuous areas. Preparations have been completed at 77 percent of the 20.7 million households in housing complexes that are linked to 2.1 million facilities.

TV is an important infrastructure that provides information indispensable in people's daily lives. In time of disaster, access to TV is critical. A situation in which some households are unable to access vital broadcast information must be avoided. The government should consider postponing the transition deadline if necessary, although the TV industry opposes the idea because of the cost of continuing analog bradcasting.