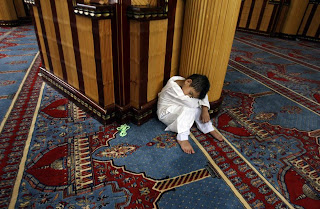 Aquino dispensation must realize that blaming the past government has a very definite, non-extendable shelf life. If for instance, a year has passed and Aquino once again pleads difficulty in delivering on the promises he made because of the mess he inherited, he cannot expect the same welcoming leniency from the Filipino people he received during his SONA.

And so we should allow Aquino to accuse his predecessor of the crime he says they have committed not only because doing so is historically correct, but also because the time has not come to judge him on the basis of his own acomplishments or the lack thereof. But before the new leaders get willed into complacency, they should realize that they now how to prove that they can uplift the counry from its current sorry state-and that if they fail to do so, they will soon no longer allowed to invoke the sins of the past.

The defeat of coruption and prosperity for all will not happen overnight, then the SONA will have served its purpose.

The Aquino administration must understand, the ball is now unquestionably in your court, to play as you see it. See that you don't drop it and add to the ever lengthening list of administrator that promised unreasonably big and abysmally little.
Ipinaskil ni Jolito Ortizo Padilla sa 5:25 AM