On the Lighter Side with my Favorite Menu of "Musenmai" 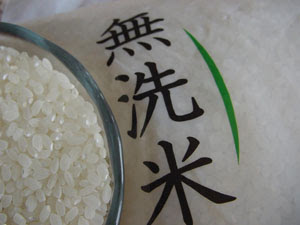 I usually spend my weekends having dinner at Hyatt Regency Hotel -Singapore located at 10 Scott Road. My favorite dish to order are Roasted Duck, Melon and Mango Salad with Beef Stew plus the "Musenmai". Santa Banana, I respect Chef Irwin Castro because of the delicious and tasty food he prepared for all the guests at the hotel.

I recently returned to 12 years back in Tokyo where I was invited to have a short summer teaching stint in one of Japan's best university. I knew a lot of things would be different after such a long time away , but I never expected the rice to have changed.My former friend, a chef ,was always a stickler about washing the rice thoroughly before cooking , but when I visited her at the restaurant, she didn't rinse it even once. She says she uses "no wash rice" now.

My friend Keiko's mother, who years ago tried to teach me how to do proper job of making Japanese rice, the first step, she explained , is to wash the rice , although in English word "wash" does not begin to convey the energy you're supposed to expend. To give a better idea, the verb in Japanese is tugo, the same word for honing a knife against a whetstone.

Under the tutelage of Keiko's mother , the process was a whole lot closer to "scrub" than "rinse", "Koshi o irete!"( Put your back on it) , she'd insist , showing me how to shove the ball of my hand against the sludge of wet uncooked rice in the pot. " Kirene mizu ga deru made!" (Keep it until the water comes clear!) she'd demand, making me pour off the cloudy water and start again. Do this tight , she warned, or your cooked rice won't have the right texture , taste or fragrance.

The first thing I learned is that all Japanese rice starts out as genmai, the unpolished kernel in its natural state , which is what we call "brown rice" in the Philippines. Although some Japanese eat rice in this more natural state. most restaurants and home prefer seisha kumai, the ubiquitous white rice that has been processed to remove the green (haiga) and bran (nuka). It maybe processed but it still has a sticky coating called hada nuka (literally"skin barn"), and that is what you're supposed to watch off before coating.

Thanks to technology introduced over the last 10 or 15 years, it's now possible for processors to remove this sticky layer against itself. The rice is tumbled for seven seconds in a tube just 30 cm. in diameter, that causes the residual barn to stick to the sides of the tube while the rest of the kernel falls away clean. No chemicals or additives are used and the process doesn't require any water.

The absence of water is significant because , believe it or not, the cloudy water consumers pour off when washing their rice has been identified as a significant source of water pollution in Japan. In the BG method , the bran comes out dry , so instead of going out with the wash water and ending up in rivers and stream, it can be diverted into fertilizer and animal feed.

If you're scoffing at the idea of Keiko's mom as a polluter , do an internal search with the word togijiru (which is what that cloudy rice wash water is called) and kankyo (environment)- I got 360,000 hits in Yahoo Japan now. When togijiru goes down the drain and into lakes, rivers and the ocean, it provides an over abundance of nutrients for algae, which multpily to harmful levels and choke off other life.

The environmentally minded coop from which I buy rice encourages members to use no wash rice by selling it at the same price as a regular rice. But in general , a sky bag of musenmai costs about Y100 more han the same amount of regular rice, although that extra expense is partially offset by better yield and savings in water, time and effort. Despite the higher cost , an estimated 10 to 20 percent of Japanese households are now using musenmai, with higher use in big cities such as Tokyo, Osaka, Singapore and Hongkong.

I was just happy to give up the chore of washing. It tastes as good if not better than imperfectly washed rice, but it's a harder sell for consumers raised on the notion to be washed to taste good. Ironically, even die hard hold outs have probably been eating no wash rice without realizing it-it's widely used in restaurants, company cafeterias and commercial food preparation. In fact if you've ever picked uot a bento lunch box from a major chain or grabbed a convenience store origiri rice ball, you van bet it was made with musenmai.
Ipinaskil ni Jolito Ortizo Padilla sa 12:46 AM