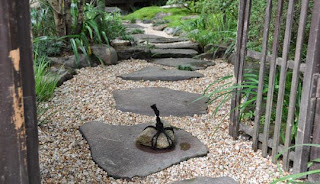 Recently, we were invited by my friend and former officemate at Sharp Corporation, Takayushi Shimizu together with my son Job who is working at Toyota- Japan as a Design Engineer and my "inaanak" Jane Aguilar who is working with the Department of Defense, USA based in Okinawa in his beautiful traditional garden with a Tea House in Kyoto.

At a front in a path, I was about to turn to the right when my son Job stopped me and said we were not to go that way. I did as he said, but I couldn't understand and asked him to explain. Job pointed to a rock tied in twine, sitting a top, a stepping stone, and claimed the means "no entry."

Takayushi explained to me that we were duly diverted by a tome ishi (stop stone) or to use its more descriptive name, a Sekimori Ishi (boundary- guard stone). It is a devise used in Japanese gardens, particularly those with tea houses to guide visitors along a prescribed route. It is occassionally seen elsewhere, such as outside traditional restaurant to indicate it's closed, but these whimsical wrong way markers are meant strongly associated with tea gardens.

In legend, at least Sekimori Ishi are linked to the great master Sen No Rikyu (1522-1591). The story, as recorded in a renowned tea tome called the "Nanporoku," is that Rikyu once invited a famous Zen priest to call. But before the priest arrived, Rikyu placed a little pot in front of the door, wordlessly and playfully challenging his visitors to find a way without crossing this symbolic barrier.

No one knows whether Rikyu really did this, given that the story was recorded a full century after his death. And no one knows who decided to use a stone of a pot. But one way or another, the convention developed in a tea circles of marking boundaries with a tied-up stones, not only to guide guests to the tea house but also to express the host's desire to help guests follow the correct spiritual path.

"People who practice the tea ceremony know about them." And do so people interested in traditional garden," according to Takayuki Shimizu, now Vice President of Toshiba International.

"One of the mysteries about Sekimori Ishi is: when did rope come to be used, and why? "he told me. "Of course, the rope makes the stone easier to notice , and to move from place to place. But ever since ancient times, Japanese people have used rope to mark off sacred space and designate things as devine. I believe the presence and authority in Sekimori Ishi comes largely from the fact that it's bound in rope.

It is not particularly difficult to make Sekimori Ishi. All you need is a rock and rough black gardening tie such as warabinawa( made from ferns) or shuronawa (made from palm hemp). The tie is the same cross you'd use to ribbon a birthday present, with decorative tuft at the top, although Shimizu adds a harness of flat knots along the bottom so the rock will sit more stably.

The hard part according to Shimizu, is finding the right rock. He spend a lot of time at stone vendors, searching for just right shape.

A good rock, he explained, is flat on the bottom so it sits well, but with a pleasing rounded from above. It should be large enough to be noticed, but not so big that it's difficult to move around.

I'm charmed by the concept of a hard rock as such a "soft barrier." If you think about it, a little rock isn't to keep out anyone determined to get in. You could step right over it, if you were so inclined. The magic of these rocks is that they work by tacit agreement, an understanding between host and guest, in the same way a "wall" made of paper provides privacy just because everyone agrees to pretend sounds won't pass through.

That softness is what inspired an architects to take this tea-ceremony concept and apply it to knotty urban problem. If you've ever walked along the underground passage between the West Exit of Shinjuku station and the Tokyo Metropolitan government headquarters, you may have noticed the odd parade of green and yellow stumps that line much of the walkway. There are several hundred of the protuberances, and while the Tokyo governemnt call them "street art", it's likely that the underlying purpose is to prevent homeless people from lodging along the walls.

Offended by such cold objects in public space, Osamu Fujimon, associate professor at Tokyo University borrowed from traditional culture to propose a less aggresive alternatives. Their idea shown at the 2010 Tokyo Designers Weed show is to replace the stumps with the modern interpretation of Sekimori Ishi. They created illuminated boundary stones by molding hard translucent plastic into rocklike shapes and lighting from inside. To finish off the design, they wrapped the rocks with rope.

"Signs with strong wordings such as "tachirii kinshi" (no tresspassing) are ugly and overly assertive, Fujomori told me. a traditional boundry stone, on the other hand, conveys information in the form of a request, not an order.It says "kokonihairo ne o goenryo kudasai" (Please refrain from entering here), that's a much gentler message, and one we'd like to see used in design more after...
Ipinaskil ni Jolito Ortizo Padilla sa 2:03 AM